Friday, 3-30-12, we decided to go to Phoenix for part of Spring Break.  We went down to visit my brother who recently moved there.  As we were driving, I received a text message from one of my nurses with Spencer's lab results.  All normal except plasma lactic acid which was HH (high high).  It was 51.2 (4.5-19.8 normal range).  I was in shock!  I pulled over in Heber, sat down on a bench and began to weep.  I knew what this meant.  I called his neurologist in Phoenix who stated he most likely has mitochondrial disease too, although a different phenotype, and recommended we contact Dr. Shoffner in Atlanta.

I sent an email to Atlanta and had Dr. Paxman (my kid's primary care provider) call his office on how to proceed. I was a wreck the entire day.  How do you tell your child news like this?  I wanted someone else to tell him, but who?  Becky and I told him on Friday night.  He took the news OK.  I explained that because of this high level of lactic acid, his recent symptoms, and our family history that it was likely that he had some form of mitochondrial disease, but we needed more testing done.  We had a great time as a family with my brother and his family.

It was now Tuesday, 4-3-12, and I had not heard back from Shoffner's office.  Spencer had his first track meet of the season in Winslow.  As I was driving to Winslow, I called my kid's mitochondrial disease specialist in Atlanta.  I'm not sure if it was inspiration, impatience, or my "demanding nature" (as my wife and co-workers label me).  I spoke with Maureen, Dr. Shoffner's Nurse Practitioner.  She said she was out of the office Monday and had gotten my email and Dr. Paxman's phone call.  She asked me more questions about Spencer, how the labs were done and more clinical questions.  I explained that he has more endurance than most people, has never had any other symptoms other than headaches and the complicated migraine.  I wanted to know if it was OK for him to participate in track and other sports.  She said she was going to speak with Dr. Shoffner on the best way to proceed with his workup and get back with me.  About 30 minutes later, she called me back and asked if the track meet had started yet.  I said no.  He was going to start running in 30 minutes.  She said Dr. Shoffner did not want him to run or participate in any sports until he had a workup and wanted to know how soon we could get to Atlanta.  I told her we could be there next week if we needed to.  It looks like we will be heading there in the next 2-3 weeks.

I was about 20 minutes away from Winslow and called Becky and told her the news.  We knew this was going to devastate Spencer.  He was so excited for track this year.  He usually wins the 800 and 1600 meter runs.  Now, I had to tell him the news.  I arrived at the track meet and couldn't find Spencer.  I found his coach and we found Spencer and sat on the bleachers.  I told him the news.  He put his head to his chest and began to cry.  His coach put his arm around him and gave him some words of encouragement.  His friend Matt came over and noticed his affect and asked if everything was OK.  Spencer told him he couldn't race and had to get some more tests.  He grabbed his bag and we walked to the Jeep and drove home.  It was a long 1.5 hour drive.  I can only imagine what he must be thinking.  Spencer loves to run, road cycle, mountain bike, and play soccer and he is really good at all of them.  This is a big part of his life.  This is where a lot of his self-esteem is derived from.  Now this is being taken away from him.  He knows how the disease effects his siblings and must wonder if it will effect him the same way. 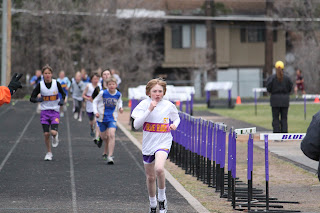 2011 Tour of the White Mountains.  Spencer had a 3rd place podium finish time of 1:30 minutes

I explained that for now, it is only temporary.  We don't know for how long, but it is important to be safe until we know more answers.  I tried to explain that high lactic acid levels in the body are not good.  Exercising and competing (especially in hot weather), can increase lactic acid levels and do more damage.

It was time to tell my other children about Spencer.  I wanted to wait until we had more information, but now that he couldn't run, they would ask why.  All of the track team knew he wasn't running and would ask him why.  We all sat down (except for Seth, he can't sit for more than 20 seconds) and had another family meeting.  I explained that the data that we know pointed towards mitochondrial disease.  I explained to them that mitochondrial disease covers a large spectrum of diseases--similar to the term cancer.  Cancer is a term used to describe a certain disease process.  You can have skin cancer that is benign or you can have pancreatic cancer that has a high mortality rate.  Spencer might have a benign form of skin cancer, but the only way to find out is to take the cancer out and study it.  That is what we are going to do.  They seemed to understand this explanation.

Mitochondrial disease is a disease that covers a big spectrum.  It is a disease with no cure or effective treatment.  You treat the symptoms of the disease.  There is a cocktail of medications and supplements that most people with mitochondrial disease take, but effectiveness this cocktail is not fully known.  Because of this, insurance companies refuse to pay for them.  Foundation for Mitochondrial Medicine, http://www.umdf.org/ and http://www.mitoaction.org/ are excellent websites for more information.  Awareness needs to be raised, insurance companies need to be required to pay for the testing and treatment that is recommended, more funding needs to be allocated for research, and clinicians need more training on the disease spectrum.

I asked if anyone had any questions, concerns, or anything they wanted to say.  My youngest daughter asked: "why us?"  As I thought of the depth of her question for someone her age, my mind started thinking of an explanation.  Mendelian genetics and the principles of inheritance, point mutations and how species evolve.  This was how I was thinking, but her question was deeper than the biochemistry and the genetics of mitochondrial disease.  She was thinking more spiritual.  I don't know the answer to "why us".  I couldn't give her an answer.  I could only say that we will get through this.  The way we will get through this is with our faith in a power greater than ourselves who's will for us is our daily challenge.
Posted by Unknown at 11:02 PM