One of the lowest points of the war was the winter of 1776.  It was in the middle of the winter. The solders were suffering from disease, hunger,  lack of shelter, and little clothing.  The army lacked money and sometimes support from the continental congress, but George Washington had the respect and trust of his soldiers.  One soldier wrote of him: “I cannot desert a man who has deserted everything to defend his country”. (Pg. 271, 1776 David McCullough)

During this low point for General Washinton and his soldiers, Thomas Pain was sick in his heart over the suffering and despair he saw.  He wrote a pamphlet called the Crisis. He sent it to General Washington who read it to his troops. This is what it said:

“These are the times that try men’s souls. The summer soldier and the sunshine patriot will, in this crisis, shrink from the service of their country; but he that stands by it now, deserves the love and thanks of man and woman. Tyranny, like hell, is not easily conquered’ yet we have this consolation with us, that the harder the conflict, the more glorious the triumph. What we obtain to cheap we esteem to lightly.”

General Washington did not give up during these extremely difficult times.  He knew he needed a victory soon or the cause for freedom would be over.  So General Washington took action.  He had a bold and courageous plan. On December 25, 1776, He crossed the icy Delaware River at night in a snow storm, marched 9 miles in the dark during this snow storm to the city of Trenton, NJ and made a surprise attack.  With God on his side, he was victorious at the battle of Trenton, and within 2 weeks, 15,000 soldiers enlisted in the army. This was a turning point in the war

In General Conference Henry B. Eyring gave a talk called Mountains to Climb it was about overcoming adversity. He said, “You and I have faith that the way to rise through and above trials is to believe that there is a Balm in Gilead and that the lord has promised, I will not forsake thee.”

King’s Peak is the tallest mountain in Utah with the elevation 13,527 feet. In 2005, my dad and I tried to climb this mountain.  We made it to about 1 mile to the summit and had to turn back due to lightning.  In 2007, we tried again.  This time, we were better prepared.  It is common for these high mountains during the summer months to have afternoon thunder storms.  We hiked to a base camp and stayed the night.  The following morning, we got up early and began our ascent to the summit.  We were above the tree line and were close to the summit.  Then, clouds began to come with rain.  The clouds were so thick that you couldn’t see more than 30 feet in front of you.  I was within 500 feet of reaching the summit, but had to turn back.

Spencer gave a great talk and has shown great courage as he climbs this difficult mountain ahead of him.  He lives what he talks.  The uncertainty he lives with about his future seems to be the hardest aspect at this time.  He loves history and he often will sit and watch history documentaries on Netflix.  The analogy he used with George Washington was a good one.  George Washington had many failures in his life.  If you have studied his life, it is amazing that someone could continue on with what he went through.

King's Peak is such a beautiful pristine environment located in the Uintah National Forest. I remember as we were hiking stopping multiple times to enjoy the scenery. I took over 200 pictures. Mountain streams, numerous spectacutar views, various types of conifers and other plants, and wildlife including multiple moose. This is the way life should be lived every day, but it is a challenge to live in the moment. 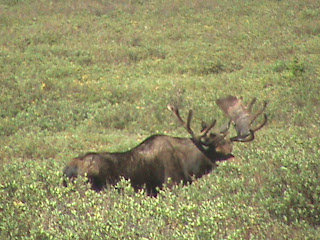 What Spencer left out in this talk was how difficult the last part of the hike was in 2007.  Not only was it raining and foggy, the last 750 to 1,000 feet (approximately) of elevation on King's Peak was bouldering and these boulders were very slippery.  These boulders dwarfed his 9 year old body and he slipped off them several times.  After many falls on these slippery boulders, exhaustion, and being cold and wet.  He decided to stop.  My wonderful brother Lynn stayed with him as I continued to make my ascent to the top.  This was my third time trying to reach the summit of King's Peak, and I was too close to turn around.

I love you Spencer, and we will do everything we can to help you climb this mountain.