March 26, 2012 is one of those days you will never forget.  I was at work.  I don't carry my phone with me when I see patient's and usually leave it on my desk.  I had just finished seeing a patient and looked at my phone and noticed that Becky had tried to call me a few times and sent a text: "Call me ASAP, 911"  As I was trying to call, she called the office phone.  She said that Spencer had a bad headache and his right arm and leg was numb, his right side of his tongue was numb, and he was having a difficult time speaking.

That morning was a typical morning.  Becky had gone off early to run with her friends.  Spencer also got up early and went for a run.  I slept in as long as I possibly could--suffering from some insomnia lately.   I left for work about 7:45 after eating breakfast and reading the scriptures with our family.

Mondays are very busy at the clinic.  Ryan was out of town so I could not call him in to cover for me.  I told Becky I would talk to Dr. Paxman and call her back.  Dr. Paxman and I initially thought we should order a STAT CT scan.  I decided to call Dr. Narayanan and get his advice.  He said a CT scan would be of little value and recommended and MRI and MRA ASAP.  These tests are not easy to get ASAP in a small town.  Dr. Narayanan thought it was a complicated migraine based on Spencer's history of occasional migraines, but wanted these tests done with our family history and to rule out a stroke.  I was not particulary worried at this point.  I've actually had a migraine that presented like this.

I refer a lot of people to the Open MRI facility, so I called them to see if we could get this test done.  They said they could do it at 11AM (a small miracle).  I told Becky and Spencer to come to the office when they were done so he could be examined.  They arrived around 12:30.

I asked Dr. Paxman to call Dr. Pringle the radiologist and make sure we get a STAT read.  He called him, and I was there listening.  He said he would get to it ASAP.  He said the MRI technician said it looked like he had an "arachnoid cyst" but he had not seen the MRI or MRA yet.

Cyst?  Cyst in the brain?  Flashbacks occured.  That is what the radiologist at Phoenix Children's Hospital called Seth's lesions on his first MRI.  An owerwhelming feeling of fear came over me.  Spencer was in an exam room and Becky was in my office.  I went back to my office and told Becky what I had heard.  The look on her face was shock!  I sat down and began to cry.  What is going on with my kids?  Why?  Not Spencer too.

Fear:  "a distressing emotion aroused by impending danger, evil, pain, etc., whether the threat is real or imagined".  The question was, was this threat (what the technologist saw) real?  Time would tell.
All I knew was I had a very distressing emotion and the thought of another child with mitochondrial encephalopathy was almost more than I could take.

Spencer's neurological symptoms had resolved after about 2 hours.  He still had a headache, but was feeling better.  They left for home, and I continued to see patients and wait for the phone call from the radiologist.  It is allergy season here in the White Mountains, and my eyes were red and watery all day.  It seemed I had allergies like everyone else, but this wasn't allergies, but sadness and fear.

Around 3:30, I got a call from the radiologist.  He said he didn't see an arachnoid cyst, but a prominent cisterna magna which is likely a benign finding.  He stated he did not see any white matter lesions.  What a relief!  I sent his MRI and MRA to Dr. Narayanan and faxed the report to him.  Dr. Narayanan is a physician that goes above and beyond what I would expect anyone to do.  I emailed him and he thought it was a hemiplegic migraine.  He said he didn't have any openings to see Spencer this week, but he would be happy to spend some time with us on Saturday or Sunday if we wanted to.

Several years ago, my oldest daughter made this picture for me.  It is on the wall in my office. 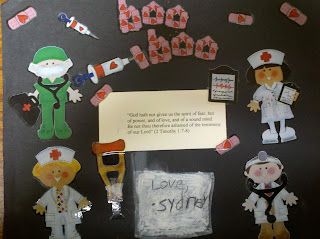 The words in the center read: "God hath not given us the spirit of fear; but of power, and of love, and of a sound mind.  Be not thou therefore ashamed of the testimony of our Lord" (2 Timothy 1:7-8).  These words of Paul our a powerful reminder to me that fear is not of God.  It reminds me if I put faith in God, that fear will be replaced with power, love, and a sound mind.  A sound mind and love is needed when dealing with children who have chronic incurable illnesses

Last night when I got home from work, I went in Spencer's room and lied down next to him on his bed and held him.  He still had a headache.  I asked him how he was feeling emotionally.  He said he was scared.  He knows about mitochondrial disease.  He knows that we don't know the prognosis for Seth and Sydney.  He also had a friend that recently was diagnosed with a brain tumor and developed right sided weakness.  I asked him how he delt with this fear.  He said he prayed a few times and that he felt like he was going to be ok.  I told him I loved him and was glad he was able to pray and have some of that fear removed.

I have been asked to speak in church on April 22.  The topic overcoming adversity.  Without trying to sound like a victim, the past several years have been filled with adversity.  I don't know what I am going to say.  Somehow, someway, our family has made it through all of this.

It is spring break this week.  Today is my last day working.  I am looking forward to spending some time with my family.
Posted by Unknown at 3:56 PM