International Rare Disease Day--"The harpoon is not yet forged that ever will do that."


"It was the best of times, it was the worst of times," Charles Dickens writes in the opening lines of A Tale of Two Cities as he paints a picture of life in London and Paris that led up to the American and French Revolution.  One of the goals of this blog is to paint a picture of a day in the life of a dad, mom, son, daughter, or family living life with a chronic, incurable, rare disease called Mitochondrial Disease.  This mitochondrial disease journey has been filled with duality as we have had several days that fall into either category Dickens describes in A Tale of Two Cities. Tuesday, Feb 12th was one of those days that I would consider "the best of times."

Tuesday, Feb 12th, we had a highly anticipated meeting with Dr. Narayanan, Dr. Craig, and Dr. Huentelman at TGen.  We discussed the details of the genetic origin of mitochondrial disease in our family.  We discussed the Center for Rare Childhood Disorders (C4RCD).

We were able to discuss in more detail the gene and where we go from here.   I am so impressed with these three scientist and this company.  Their commitment to help families like ours is extraordinary.  My children were excited to meet these scientist whom they have been praying for.  Sierra (sitting on my lap) has been the one who prays almost every night for these scientist and others across the world to be able to find a cure


It's hard not to end this post without another analogy from Moby Dick.

In the final days of the Pequod's quest to find Moby Dick, the ship, by chance, meets up with two other whaling vessels who recently had encounters with The Great White Whale that...well...turned out well for the whale.  One ship called the Rachel and the other ship "most miserably misnamed the Delight."

The author, Herman Melville, describes the scene when the Pequod meets the Delight, "Upon the stranger's shears were beheld the shattered, white ribs, and some few splintered planks, of what had once been a whale-boat; but you now saw through this wreck, as plainly as you see through the peeled, half-unhinged, and bleaching skeleton of a horse."

Captain Ahab yells out: "Hast seen the White Whale?"  The captain of the other ship cries out: "Look!, replied the hollow-cheeked captain from his taffrail; and with his trumpet he pointed to the wreck."  The Delight had seen the White Whale and suffered the loss of 6 men and catastrophic damage to the ship.

The captain of The Delight responds most eloquently: "The harpoon is not yet forged that ever will do that."

Ahab replies:  "Not forged! and snatching Perth's levelled iron from the crotch, Ahab held it out, exclaiming--Look ye, Nantucketer; here in this hand I hold his death!  Tempered in blood, and tempered by lightning are these barbs; and I swear to temper them triply in that hot place behind the find, where the White Whale most feels his accursed life!"

The Rachel's encounter with Moby Dick also had fatal carnage as the outcome as the captain of the ship lost his son during the pursuit.  What a beautiful biblical metaphor the author uses here to name the ship--The Rachel.  This biblical reference is "Rachel weeping for her children" (Jeremiah 31: 15 and Matthew 2: 18).

February 28th is the 6th international Rare Disease Day.  Our family will be participating in this special day as we join with thousands of other families around the world to help find cures and raise awareness.  It is true that "The harpoon is not yet forged" to cure mitochondrial disease or other rare diseases, but significant progress is being made.  Our family's story is an example of the progress.

I see too many families who are like The Rachel or Delight and have been broken to pieces financially pursuing a diagnostic odyssey.   Death and/or divorce is all too common because of this disease.  I see too many green candles on Facebook which represents another child who has passed away from mitochondrial disease.

It will take cooperation and collaboration amongst the scientist.  It will take philanthropist and others to help raise funds for research.

Our family has pledged to do our part.  In the coming days, more will be announced of our specific plans.  I hope I can look back and say, we did our part.

Sydney and Spencer standing in front of this original DNA molecule in the London Science Museum.   Since that time, our genome has been put on one of these chips that a computer can read and sequence.  Absolutely amazing to me. 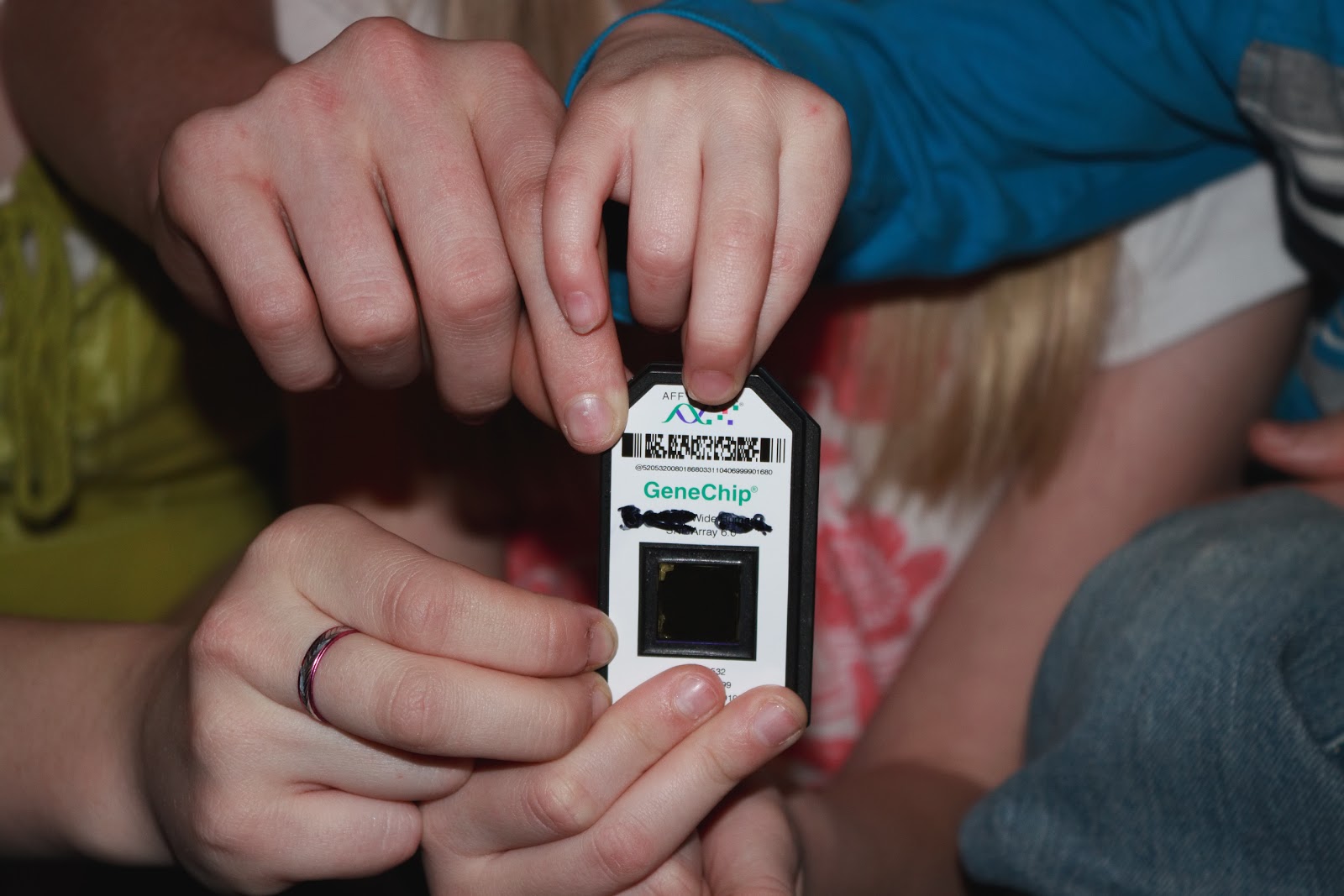