December 13th, 2012 we loaded the kids in the car for another trip to Phoenix.  My brother Kevin and his wife had no idea when they moved here 1 year ago that they would have such frequent house guests.  My kids get a long well with their kids and love going to see their cousins.  This makes the trips a lot easier.

We had our final scheduled doctor's appointment for the year.  Seth was scheduled for testing on his optic nerve and retina at Phoenix Children's Hospital on December 14th.  His pediatric ophthalmologist, Dr. Leverant has consistently stated his optic nerve on his right eye looks pale.  She wanted further testing.  He had an ERG (electrorinography) and VEP (visual evoked potential).  Essentially, Seth had to sit completely still with electrodes attached to his scalp and face while bright lights were flashed into his eyes. 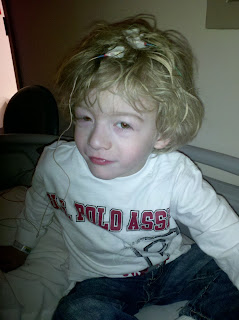 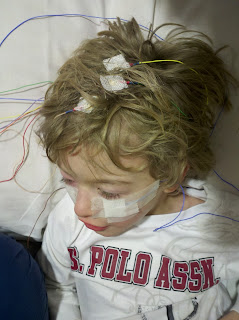 He was such a trooper.  He did remarkably well considering he usually can't sit still longer than a few minutes.  He engaged in conversation with the technician  and by the end of the testing had completely enamored her.  His smile, kindness, complimentary spirit and happiness had won her over.  Seth told the technician how much he "loved his aunt Catherine" and how much he "loved going to her house", spoke about their cat, sweeping her floors and her Christmas trees.  Seth then asked her: "are you ready for Christmas?"  It was almost 3 hours of this sweetness.  I have told Becky that sometimes I am envious that she gets to be with him so much and experience his sweet personality.

I volunteered to take Seth to the hospital and wait with him.  The other option was to take my other kids Christmas shopping at the mall.  This was a no brainer for me.  The results were normal.    After the testing was done, Seth and I went and had lunch in the hospital cafeteira.  I'm not sure which one I prefer--McDonald's Happy Meal or hospital food.  While we were there, Seth made sure he was able to speak with as many people possible--interviewing doctors, nurses, and other patients.

The following day was the highly anticipated Arizona Mito Walk.  The weather in Phoenix was terrible, but we had so many people come out and support us.  Becky and I were deeply moved by those who took the time to support us.  There were 40 people that signed up to walk with our team.    This journey can be a lonely cold walk down a road and can elicit fear in me.   In reality, what this Walk and response to our video and blog has done has made us realize that we are not alone.  We have so many good people that have helped us along and who are willing to support us in different ways.

So even though th AZ Mito Walk is over, our family will continue to walk down these roads that we have not ventured on before, knowing so many of you are with us!