I haven't written anything substantial for several weeks.  It has been a rough, often dark time with anguish, despondency, uncertainty, and joy.  I will expound on each of those feelings in this post.  One might ask how the emotion of great delight and happiness can be experienced during this difficult time.

Today, we are celebrating Seth's 6th birthday.  This is a joyful day!  Last year I posted something on his birthday and I wondered if he would live to see his 6th birthday.  We lived each day with the uncertainty of his disease not knowing if each day would be the day when he would start to decompensate.  It's hard to live life to the fullest when you have these feelings in the back of your mind.  But now, those feelings aren't as strong.  Without being naive about Leigh's Disease and Cerebral Folate Deficiency, I am more hopeful for his prognosis based on how well he has done over the past year.  Clinically, he has made leaps and bounds.

Last year at this time of year, he had no idea what a birthday was.  He was only putting four words together and his vocabulary was limited to around 20 words.  His dysarthria was improving some, but was still significant.  He was unable to have a conversation with someone, and cognitively, he was doing very poor.

A few weeks ago, we started asking Seth what he wanted for his birthday.  His birthday list would change everyday except for one item--a toothbrush like "daddy's toothbrush".  Yesterday, Seth and I went to Lowes and he was talking to almost everyone we passed in the store.  He would ask them their name and when their birthday was.  He is so friendly and his love for people and life radiates to those around him.  One of his teachers at school told me he is a "celebrity" at school because of his personality. 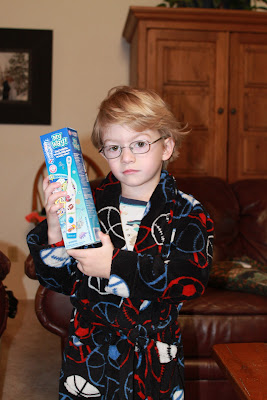 Some details about our long anticipated trip to Atlanta.  Dr. Shoffner wanted to see all of our kids since Spencer had his neurological episode in March.  We all flew back there May 22nd.  The trip was exhausting filled with doctor's appointments, metabolic rate testing, and surgery for Spencer.

In our appointment with Spencer, Dr. Shoffner stated that there really isn't any other explanation at this time for Spencer's neurological events other than some type of mitochondrial dysfunction--especially with our family history and his "extremely high" lactic acid level.  In my heart, I knew this, although I hoping it wasn't the case.  He explained that there are many ways that mitochondrial disease can manifest and that the severity of dysfunction varies.  I explained that Spencer is so active and has so much endurance and it has never been a problem before.  He stated that Spencer's health history and exercise history is insignificant prior to his hemiplegic migraine.  He stated that the genes that code for the proteins in the mitochondria likely turned on recently and until we had more testing done on him he strongly recommended Spencer not participate in any endurance events or competitive sports.  This was devistating for Spencer!  Soccer, competative cycling and mountain biking, and track are all done for now.  He is taking the news like a champion.

He than gave us options on how to proceed.  I told Dr. Shoffner I wanted to be aggressive in his testing so we did not have to delay the definitive diagnosis.  He was scheduled for surgery two days later to get a muscle biopsy and a lumbar puncture.  My other 3 kids saw Maureen, Dr. Shoffner's Nurse Practitioner.  She is an excellent clinician and has been very helpful with helping us manage the day to day difficulties of children with mitochondrial disease.  All of our kids had blood and urine testing done and Sierra was scheduled for a lumbar puncture.

Friday, Maureen emailed me and gave me an update on Spencer's labs that have come back.  One of his lactic acid levels was a little elevated at 17 (normal range 3 - 11) , but not near the levels he had back in March when it was 51.  His cerebral spinal fluid lactic acid, folic acid, pyruvate, and a few others were all normal.  This was great news!  Sydney and Seth have extremely high lactic acid and pyruvate levels in their brain and very low folic acid in their brain.

Yesterday, Becky, Spencer, and I went for a small 8 mile road ride.  It felt so good to be back on the bike with them.  I have been biking with Spencer since he was 6.  He would beg me to go on mountain bike rides (didn't have to beg for this is one of my passions).  I have only ridden my bike about 4 times since Spencer was told he couldn't do any sports.  Now, they want him to still exercise, but not at the levels he is used to.  After our ride, Spencer was exhausted.  This was not normal for him and makes me wonder if truly there is some mitochondrial dysfunction.

Finally, during this difficult time for our family, life continues to go on.  I am often asked, I don't know how you guys handle this and go on.  Well, you really don't have any other options other than moving on.  Life is difficult, but there are times when you feel joy like today as we celebrate Seth's birthday.
Posted by Unknown at 11:14 AM