"Call me [Newell]...whenever I find myself growing grim about the mouth; whenever it is a damp, drizzly November in my soul; whenever I find myself involuntarily pausing before coffin warehouses, and bringing up the rear of every funeral I meet; and especially whenever my hypos get such an upper hand of me, that it requires a strong moral principle to prevent me from deliberately stepping into the street, and methodically knocking people's hats off — then, I account it high time to [find some epic single track, strap my 29er Trek HiFi mountain bike onto my jeep and go mountain biking] as soon as I can." 1 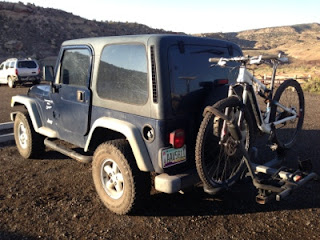 The timing of this "hypos" was perfect. My oldest daughter, Sydney, has been staying with family in Utah for the past few weeks and it was time for her to come home.  I met my mother and father in-law in Moab, Utah to pick her up.  For those of you who are familiar with Moab, Utah, you know that this town is considered a mountain biking mecca.

It's a 6 hour drive from the White Mountains in Arizona to Moab, Utah.  I arrived late Sunday night and got up with the sunrise so I could get spend half of a day riding my mountain bike.  I have found this method of exercise a fantastic way to get the endorphin levels up to naturally increase my serotonin and dopamine levels. This is my alternative to anti-depressant medications, although there was a time in my life when I was on these.

On the drive up here, I thought a lot about my oldest daughter as she enters a new phase of her life.  She successfully graduated from Blue Ridge High School this year.  This was no easy task for her, but she did it.  With her IEP (Individualized Education Plan) and with many wonderful special education teachers, she did it.  Sydney was graded a lot on effort.  I am so proud of Sydney for this accomplishment!

As a father, you always want the best for your children.  You want them to be happy and successful.  It pangs you when your children are sad or when people make fun of them.  Unfortunately, because of Sydney's disabilities, she was made fun of and did not have a lot of friends.  To those people who were her friends and teachers who took a special interest in her (you know who you are), I will be forever grateful for you.  To those people who made fun of her and refused to help her, I pity you.

I will never forget the first time that someone told me of the severity of Sydney's  mental/cognitive problems.   It was a psychologist she was seeing when she was in the 3rd grade.  He told us that Sydney would be lucky if she could work at Taco Bell and wanted us to prepare her the best way we could.  I thought, how the hell can someone make this kind of assessment on a child so young.  I was in a state of disbelief and I refused to accept his assessment.  In reality, I was in a state of ignorance.

Fast forward to the 4th grade and her first science project.   I love these projects!  Those who know me know that I love science.  This was my first science project as a father and I was excited to say the least.  I (we) decided to study yeast.  Most of you know that yeast makes bread rise.   Yeast is similar to us in that we both require oxygen and sugar (glucose) to thrive and grow.  This is our main source of metabolism.

We decided to see if yeast could metabolize sugar substitutes for an energy source. We tested normal table sugar, Splenda, Equal, Aspartame, and no sugar for our control.   This was exciting.  My children saw the true nature of their father and I went from cool dad status to "geek" status.  We put warm water, yeast, and the potential energy source into a bottle and put a ballon on the top so we could catch the carbon dioxide that the yeast would produce as waste (similar to us and other multi-cellular animals).  Well, it was no surprise which balloon filled up the most and our hypothesis was supported by the data we observed.

But more importantly, I observed for the first time the severe learning disabilities my daughter had and I was truly sad!  My daughter is the hardest worker I know.   She tried so hard to get these simple concepts of biology, but she could not do it.    For the first time, I realized the psychologist may have been correct in her prognosis.  For the first time, I new that some permanent cognitive problems existed and that she would need significant help, but I had no idea to what extent and what the future would hold.

Fast forward to the present.  Because of the severity of her mitochondrial disease, it was strongly recommended by her special education teachers and her doctors to obtain legal guardianship and conservatorship over Sydney.

We sought the services of an excellent attorney, Brendon Rogers, who helped us get this done.  We were in unchartered waters with this and he helped us every step of the way.  During this process, our attorney strongly encouraged us to apply for disability.  He encouraged this for a few reasons, but ultimately, this was in Sydney's best interest so that if something ever happened to us, she would be taken care of.

The guardianship/conservatorship process was smooth and uneventful.  The judge did not question one thing.  Sydney's court appointed attorney and the private investigator who came to our home and interviewed us all did not question anything.  It was evident that, unfortunately, this was necessary.

The next step was getting her disability.  The law states if you have a condition that prevents you from obtaining gainful employment you qualify for disability benefits.  Intuitively, one would think that if the state has found it necessary that you need a legal guardian and conservator because of your mental and physical incapacities that obtaining gainful employment is also going to be a problem.

We filled out the paperwork and sent in the required documentation to support her case.  We fully expected to be approved based on the recommendations by several of her doctors.  Well...Sydney was denied.  We were told she did not meet the criteria and that we could appeal her case which we did only to be denied a second time.  I realized that I was David fighting Goliath.  I was standing there in my tunic fighting Goliath with my sling in hand.  I reached into my pouch for the smooth stones to throw, and realized my pouch was full of sand.  Realizing this battle would not be won with sand, I went and hired an attorney to fight and hopefully win.  We go to court next month.

Having children with disabilities is never easy.  But there is something about these children that makes them unique and very special in my eyes and the eyes of God.   Unfortunately, there seems to always be a fight to be fought.  Unfortunately, there are those who are mean and ignorant to those with disabilities.  I love you Sydney and will spend the rest of my life fighting for you and your disease.