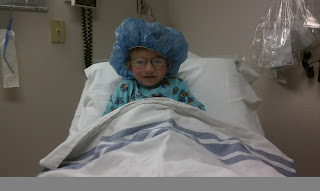 It's been awhile since I've written about my children.  We had a great summer together that was pretty uneventful as far as their disease goes.  Seth is speaking more and falling about the same.  Sydney had a tonsilectomy for her obstructive tonsillitis and had some complications.  Her glucose spiked to 340 and she started bleeding 8 days after her surgery and had to go in for emergency surgery.

Mitochondrial disease is a multi-system disease.  It can effect every organ system in the body.  It is possible that Sydney will develop diabetes.  I hope not.  Sydney called from school today stating she wasn't feeling well.  I told her to go to the nurses office.  I called the nurse and told them to check her pulse and blood pressure.  Her resting heart rate was 145!  I had her come to my office and did an ECG which showed some changes from her ECG 3 weeks ago.  I faxed her ECG to her pediatric cardiologist and he thought her arrythmia was coming from her atrium and not her ventricles.  That was reassuring.

It never stops!  I am on edge thinking when will the next problem happen.  I have been so stressed lately and living in complete fear.

Seth goes in tomorrow for another MRI under general anesthesia.  Each MRI has showed progression of the mitochondrial disease to other regions in his brain and enlargement of the existing lesions.  I am scared.  I love Seth and it has been difficult to watch this process.  The other night, our family sat down to talk about Seth's MRI and I asked how each of my kids were feeling.  They all seemed to be ok.  They were a little scared, but the overwhelming feelings they expressed were that he would be ok.  I don't share the same feelings.  Maybe it's because I'm in medicine and I know how this disease progresses.  Maybe it's because I have no faith and I live in fear.
Posted by Unknown at 5:46 PM